In celebration of Women’s Day on 9th August 2018, Ntataise reflects on the successes and achievements of Puleng Motsoeneng who overcame difficult circumstances in pursuit of her passion for Early Childhood Development. With the support of Ntataise, an organisation which strives to empower women to create a brighter future for our children, Puleng transitioned from a pre-school teacher, to a fieldworker, to a trainer, to a manager, to Director of Ntataise.

“Teaching is the love of my life. There is no greater happiness than watching both children and adults meet their potential through learning.” – Puleng Motsoeneng 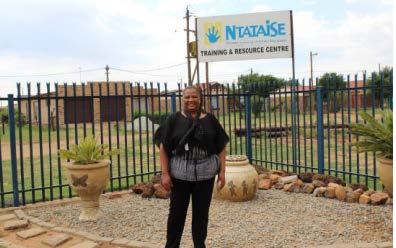 Puleng grew up with her 10 siblings on a farm where her parents worked in the Free State called Vergenoeg. Until the age of 5, Puleng remained at home as there was no pre-school available on Vergenoeg nor on the surrounding farms. Later, Puleng attended primary school on different farms, some 30 kilometres from her home which she had to walk to as no transport was available. When it was time for Puleng to attend high school, she had to move away from her parents to the Rammulotsi township, where she then lived with her aunt.

Puleng married and had her first child soon after she wrote her matric exams, after which she moved to be with her husband’s family on Niekerksrust Farm. Puleng’s ambition was to become a nurse and she applied for a position in Klerksdorp. Puleng was accepted for a position in the nursing school but unfortunately was never informed of this as the written letter of acceptance was posted in December while the farmer and his family were on holiday, so the letter remained in the post box until January. Devastated, she returned to Niekerksrust Farm and looked after her child.

Puleng’s husband worked on the mines away from the farm, only returning on weekends. As Puleng resided with her inlaws on Niekerksrust Farm she had to earn her place by contributing to the farm in some way. Trying her best to work in the fields harvesting beans, she soon realised that this was not the life for her and she wanted more…

In 1987, Puleng went to the Huntersvlei Ntataise Pre-School to receive formal training to become a pre-school practitioner.

Not having attended any form of pre-school herself, she had no knowledge of how to teach young children and develop their skills. When asked what Puleng would like to achieve from the Ntataise Training Course, she said to teach children how to read and write. Looking back on this now, Puleng laughs as she had no real idea of what Early Childhood Development entailed. The training changed her life, she found it fascinating and wanted to teach all the parents in the community what they should be doing with their children to develop their mental, social and physical skills.

Building up a status within the community

Puleng was soon recognised within the community for starting and operating one of the best pre-schools in the area, a direct result of the Ntataise training and her passion for the work. Soon she was appointed on
the Community Council, and nominated as Chairperson for the Women’s Club. Parents approached Puleng to request that she teach them how to read and write. Ntataise again offered training for this through the Rural Foundation.

Puleng was running a pre-school of approximately 15 children in the morning, attending the Woman’s Club in the afternoon as Chairperson and teaching the mothers and fathers of her pre-school children to read and write in the evenings. Even her in- laws were regular members of the evening classes.